Home » Lifestyle » Why Cast Iron Cookware is a Must-have
Lifestyle

Why Cast Iron Cookware is a Must-have 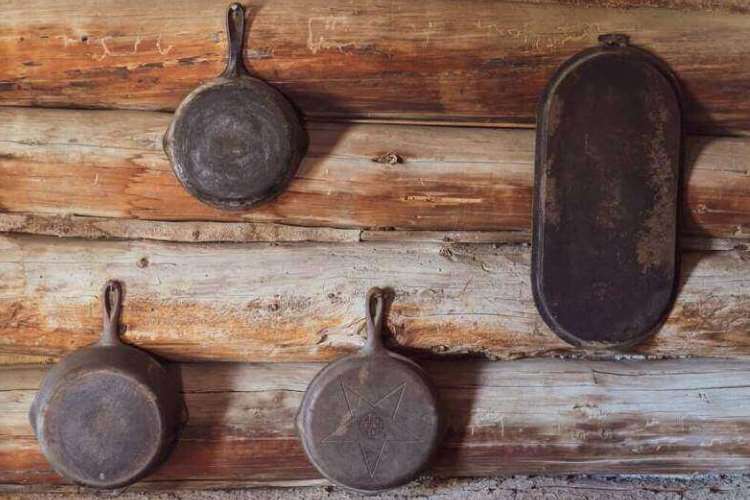 Cast iron pots and pans are the greenest cooking utensils around.

I own three of them. One’s a ten-inch skillet, another a slightly smaller pan and the third is this gigantic Dutch oven I bought from a yard sale. The first two have been passed down three generations. The Dutch oven needed some tender love and care before being fit to use but now it’s as good as new. Just last week I conjured homemade applesauce in it, with fantastic results. (I have a thing for apples. Here are some neat apple tea recipes and their benefits for apple fans. )

Their immense durability – they can last centuries – makes cast iron utensils some of the most sustainable and environment-friendly utensils around and ideal for individuals who practice slow living.

But there’s more to why these shiny black beasts are also the greenest.

I have been told a number of times growing up about how our skillets were made some time in the mid-19th century. Their appearance seemed almost magical to me – black, formidable history behind them, and they seemed so fresh and new. Over the years I’ve seen older ones that look as though they were fresh off the foundry. Bottom line – these beauties are immortal.

They are safe and easy to clean

We’ve all seen non-stick pans that are advertised on television? Nothing against them but cast iron pans are the original and quintessential non-stick pans, with an added benefit. They have no adverse effects that you might possibly get with Teflon cookware that are made with perfluorinated chemicals.

Also, you can serve food in them if you want, which negates the need to use other utensils that may contain microplastics and thus reduces your plastic footprint.

Plus, they are incredibly easy to clean. A brush and hot water does the trick and there is no need for soaps. Another eco-friendly box checked. I have always seen my family skillets washed with hot water and I never ventured to enquire why. Few years later I learned that cast iron and cold water does not go well together. Cold water on super hot cast iron can cause the pan to crack.

They are versatile and easy to use

God forbid, but if you are in physical danger, a cast iron pan is a mighty deterrent to your assailant. If it was good enough for Rapunzel in Tangled, it should be good enough for you.

On a less violent note, you can put them in the oven, place them atop a stove or even take them to the woods. You can use them to deep fry, roast, bake, stew or whip up an omelet. Their tremendous heat distribution properties also make cooking in them a more energy efficient exercise.

They are healthy and quite cheap

Iron resides at the core of our planet, and deep in our bodies. It also happens to be one of the most common nutritional deficiencies. Cooking in cast iron can supplement the iron content in food. This is good for your blood and helps to prevent health issues like anemia and contributes to maintaining and restoring your gut health. And it is quite cheap. You may laugh at the suggestion as the cast iron utensils in the market carries a handsome price.

But we are talking about a product that lasts for generations.

How to clean cast iron pots and pans

Here’s how to clean your cast iron pan after you’ve done cooking in it.

Step 1: Rinse it in hot water and use a brush or non-scratch pad to wipe the surface off any food bits.

Step 2: Dry the pan thoroughly with a towel and heat it in a stove on low heat till there is no moisture left. (Some prefer the oven.)

Step 3: Coat the dry pan with saturated fat or cooking oil. This offers a protective layer to the pan that helps to avoid rust. If the pan is used regularly, you can opt for olive oil. However, this may not work if you are someone who uses the pan sporadically. In such cases, I tend to go for lard or butter, as they do not go rancid easily.

Step 4: Store the pan in a moisture-free, dry environment to prevent rust from forming.

There is no comparison between them. Each comes with benefits that the other does not have.

What you get with cast iron is near indestructibility because it is, after all, iron. The even distribution of heat is another big plus. There are also no hot spots with cast iron which gives the cook control over what they are making. They are ideal utensils for slow cooking.

Additionally, cast iron is great at retaining heat. Even if the skillet or Dutch oven is off the stove the food remains warm for a long time.

The cons for cast iron cookware are that they can be quite heavy and pan does sometimes affect the taste of the food, especially acidic food. They also tend to take longer to heat up, so if you are looking for a quick breakfast, perhaps you should pick some other pan.

One advantage that stainless steel cookware has over its cast iron counterpart is that it is quite light. Plus, cleaning them is relatively hassle-free and you don’t have to go through the routine of oiling them every time you cook.

They also tend to heat up quite quickly making them perfect for quick dishes, like eggs or bacon for breakfast on a busy work day.

The metal is also non-reactive and the taste of the food is not affected.

Some of the disadvantages are that they tend to develop hot spots and you are more likely to burn food in them. The center of the pan also tend to get raised under constant use which makes it difficult to cook some foods, like say a salmon filet.

Plus, the outside of the pans tend to become discolored under constant heat and salt water can cause pitting.

Stainless steel cookware offers greater versatility and is generally easy to maintain. But, for the ardent and dedicated cook there is no better material for cookware than cast iron. In fact, they are a not a bad choice for even those who cook once in a while.

And cast iron skillets and pans look so much classier.

Shell out that extra dough for guaranteed quality. While there are many cast iron manufacturers around, Lodge products are highly recommended. Smithey Ironware is another name that is famous for its skillets. Other brands that generally offer value for money include Staub, Le Creuset, Stargazer, Cuisinart, and VonShef.

Do you prefer cast iron or stainless steel for your cookware? Does cast iron seem a viable choice in the kitchen or is it too much of a hassle? Let us know in the comments.

50+ ways to reduce your plastic footprint

Does the perfect green product exist?

How to Start an Apothecary

9 Other Pollinators Besides Bees

Why Bees Matter to Us and How to...

Why Antique Furniture is Eco-friendly & How to...

I enjoyed this one. I have been using cast iron cookware for over thirty years, and I can guarantee you the food becomes better with time as the pans take in the seasoning. The kitchen has twelve different pots and pans and most, like yours, have been passed down generations. I don’t like buying commercially though I do enjoy cooking in a Stargazer skillet my daughter gifted me last spring. Good read.

Thanks Bob. That’s very nice! Cast iron cookware is a great addition to any kitchen. The less you neglect them the more they perform. 🙂

I love cast iron; one can easily restore rusted iron because it is so durable. We have three cast iron skillets, a flat cast iron crepe pan, a griddle, and two cauldrons we use to bake bread in so you can see we love it.
We do not use our cauldrons much for stovetop cooking but they make marvelous bake ovens to tenderize meat in the oven! The way the iron imparts a unique flavor to the food is wonderful!
Thanks for sharing this!

Awesome! You have me beat on the number of cast iron cookware. 🙂 Time for me to buck up.
And I so agree on the flavor bit.

I absolutely love cast iron. Good info on how to maintain them. I stay off soap and use lard.

Thanks. Show them some TLC and they stay friends for life.

Thanks a lot for the tips on how to clean the iron cast cookware. Really valuable information.
Looking forward to more useful articles like this.

Glad you found this useful. Thanks for reading 🙂