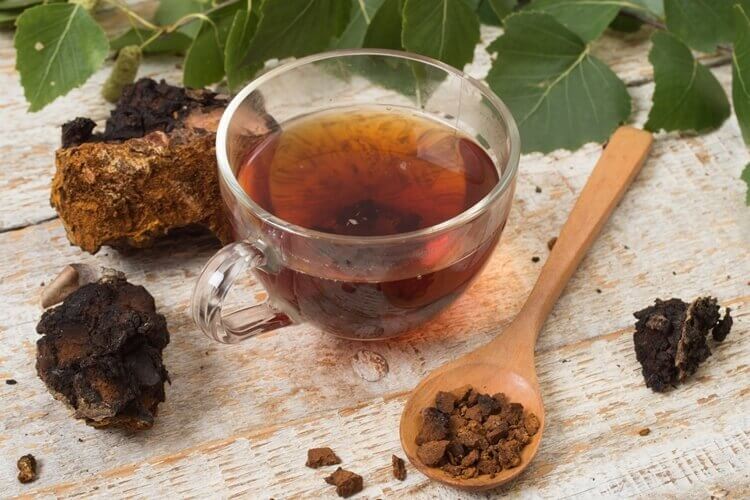 What’s all this buzz about chaga tea?

It’s only a tea made from a mushroom that looks like it has survived a fire. So, you see, it’s unlikely that the chaga’s appearance will not make you go scurrying to the market.

But the popularity of the tea suggests there must be something to compensate for the lack of a red-carpet look.

Yes, chaga is chock-full of antioxidants. Like our apple herbal tea, the chaga tea is quite effective for disease prevention, besides being a good substitute for coffee. It is also a great addition to your apothecary.

We’ll get on to the benefits of chaga tea later in the post, but first, let’s delve a little bit more into what this mushroom is all about.

The chaga mushroom is available in the Northern Hemisphere where colder climates prevail, which explains its popularity in Russia.

This mushroom was highly sought after in the country as far back as the 12th century. Even now, it is an invaluable part of folk medicine.

Also, there are rumors that the chaga mushroom was a sought-after medicine during the age of the Roman Empire.

These days, you find them in Canada, some parts of the United States, and Scandinavian countries.

There are a few rules to follow when harvesting the mushroom.

One, it should not be overharvested.

Two, it should only be harvested from birch trees that are not dead.

After picking the mushrooms, they must first be thoroughly dried and broken into small pieces or powdered for consumption.

How does chaga taste?

The chaga is not your typical mushroom.

The two adjectives prevalently used to describe the chaga taste are “earthy” and “bitter.” There is also a unique vanilla-like flavor to the mushroom; the organic compound (vanillin) found in the vanilla bean is found in chaga.

How do you drink chaga tea?

There is no hard and fast rule to it. Some like the taste, while others may need some time to develop a palate for the beverage.

Even a mild version of the tea is good enough for health purposes as chaga is full of antioxidants. To compensate, you may add other spices to give the tea more flavor.

Time to look at the benefits of chaga tea.

The most valuable of anti-bacterial drugs, penicillin, came from a mold. So, it’s not a stretch to assume that mushrooms too may have something to contribute to us.

This means chaga does possess numerous benefits as advertised, right?

“Yes” is the optimistic answer though the research is still inconclusive. So far, nothing is set in stone, but the signs are good.

Lab testing (non-human) has shown that the mushroom can alleviate many ailments that affect us.

According to studies, the chaga mushroom can improve the immune system by producing cytokine, a protein that can fight against both minor and life-threatening health issues.

So, can chaga mushrooms fight cancer?

Tall order, no doubt, but it’s not completely out of the question.

Chaga mushrooms are high in antioxidants. These chemicals may be able to fight free radicals that cause cancer. Lab testing has revealed chaga to have the ability to slow down cells that cause breast and cervical cancer.

They may also fight against the chemical, tetra-butyl hydroperoxide which is known to harm the liver.

Chaga may also be anti-inflammatory, as cytokine can reduce inflammation and may combat autoimmune diseases.

Further, chaga mushrooms may have the capacity to lower blood pressure and blood sugar.

Besides antioxidants, other substances found in chaga that benefit human health are as follows.

What of the side-effects of the beverage? Does chaga tea have any? Nothing’s been established yet on this count, though it may not be ideal for some individuals.

The presence of oxalates in chaga tea may be dangerous for the kidneys in some people. These oxalates may also prevent valuable nutrients from being absorbed by the body, especially if you take too much tea.

Also, it’s best to stay off chaga tea if you are already on blood-thinning medicine, as the mushroom can exacerbate the effects.

Same for those on diabetic medications as chaga may lower blood pressure.

You can make chaga tea with chaga powder or with chunks of dry chaga mushroom.

For both, you first need to dry the freshly picked chaga for a good 30-40 days or until all the moisture has left the mushroom.

Once the mushroom is dried, use a chisel or a hammer to break it into small chunks.

Take a piece that is about 1-2” and steep it in boiling water for 10-15 minutes or more, depending on the flavor you want.

Pour the liquid into a cup, and your chaga tea is ready.

You can add other spices to increase the flavor and add honey or sugar if you want your tea sweet.

For the powdered version, you will need a robust grinder or a home flour mill machine.

Place the chaga chunks in the grinder/mill, and ensure that they fit well and aren’t too big.

Run the grinder/mill till the chaga has been thoroughly powdered.

Take two teaspoons (that’s how I like it) of the powder and place it in a teabag.

Steep it in boiling water. I do it for 7 minutes, but it’s really up to you and the kind of flavor you desire.

Your tea is ready. You can drink it this way or add spices of your choice for a more rounded flavor.

The power of nature in green living

Things found in nature have more value than we give them credit. The chaga mushroom is no different.

To survive in the wild, it needs to be tough. It has to constantly fight and overcome dangerous elements such as microbes that can potentially harm them and us too.

So, when we consume the mushroom, we are imbibing their strength and power.

And the chaga has plenty of both. This “mushroom of immortality” may be more than just hype.

It contains minerals such as calcium, copper, magnesium, phosphorus, sulfur, and zinc, and has more potassium than a banana.

Chaga energizes. It is coffee minus the threat of turning you undead.

In a world of “superfoods,” some of which fall short of the criteria the moniker demands, the chaga tea might just be different.

What do you think of the health benefits of chaga tea? Have you ever tried it? Let us know in the comments.

This is so interesting. I’ve never heard of Chaga before. I’ll definitely have to give it a go.

Great post! I like trying new teas, thank you for sharing the health benefits of this one x

I have heard about this tea but have not used it yet (still not sure, tbh) but it does sound like it has some good benefits for overall health. I love medicinal teas and find them to be a great way to boost my body and mind so I appreciate this info!

Thanks Molly. Chaga is good for your health and I don’t know of any side-effects as long as you don’t drink too much of it.

Great post! I hadn’t heard of chaga tea before but this sounds great for your health so I’ll have to try it out! Thanks for sharing x

Thanks! Chaga does have quite a few benefits.

We have harvested a few chaga mushrooms from the birch trees in our woods. Let me tell you, it is VERY difficult to chop/crush the whole mushrooms into pieces, much less powder them. The mushroom feels like it is rock solid. “Earthy and bitter” are also two excellent words to describe it; it often reminds me a little of the reishi mushroom.

Love that you break down the elements of what makes chaga tea so beneficial, and your final words about chaga being coffee without the threat of turning undead resonate with me the most!
Thanks for sharing. <3

Thanks Jaya. Yes, it’s a fun substitute for coffee and I quite enjoy the taste.
Also, I feel your pain about the hardness. I typically get powdered ones. However I have seen someone do a proper job on the poor mushroom – hatchet, hammer, chisel, screwdriver, et al. The chunks were then ground in a heavy medieval-era grinder and powdered effectively (not smooth). I bought some of it and it tasted better (all the effort I guess lol). The grinder needs to be sturdy after the pieces have been broken down, they say nutribullet works but I can’t say for sure.
And thanks for the heads up. I will be adding the “hardness” bit to the article. xx

I’ve never heard of this, but I’m definitely intrigued now!