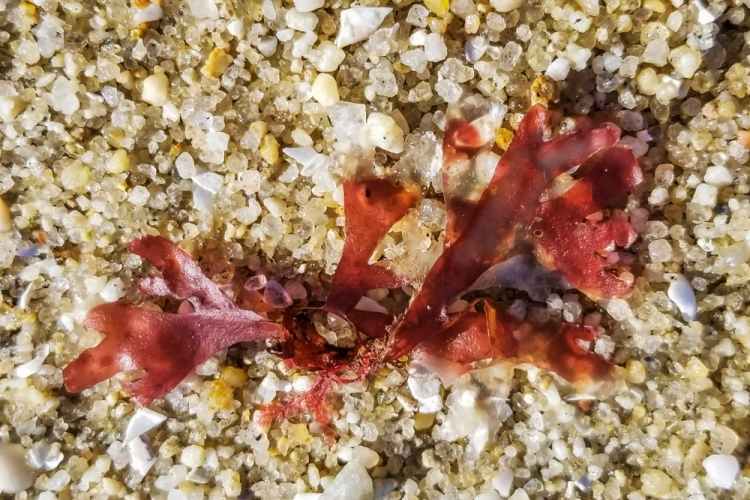 What is Irish moss?

The first thing to know about Irish moss (Chondrus crispus), sometimes called sea moss, is that it isn’t exactly a moss.

It’s seaweed with many health benefits, which has acquired something of a global popularity.

This red algae is no new discovery though. The Irish have used it for centuries, most prevalently in milk beverages during the Potato Famine to meet nutritional needs. For them, it was also said to bring protection and good luck.

However, despite the name, the seaweed is not an exclusive Irish thing. It is also quite popular in the Caribbean islands where people have used it over the years to treat different ailments.

In certain parts of Scotland, where it is called (An) Cairgean (Scottish Gaelic), the seaweed is boiled in milk, strained and combined with sugar and flavors such as brandy or whisky, cinnamon and vanilla.

Irish moss grows copiously along the rocky shorelines of the Atlantic coast of North America and Europe.

Now that we’ve been introduced to Irish moss, let’s go through some of its health benefits.

Great for the colon.

The presence of minerals like iron and magnesium and its gelatinous and fibrous texture makes it a very effective prebiotic. In other words, it is nutrition to the good bacteria in our stomach, which helps bring down bad bacteria and consequently improves our gut health.

Our thyroids need different compounds of iodine to function at its optimum and Irish moss has plenty of them in its arsenal.

The seaweed contains concentrated iodine which is responsible for our digestion, metabolism and mood, among other things. One of its biggest benefits is that Irish moss enhances thyroid-stimulating hormone (TSH) which as the name suggests activates the thyroid hormone.

Besides iodine, Irish moss also contains selenium which is also essential for releasing the TSH.

While it is pretty effective on its own, Irish moss unlocks a new level when combined with the seaweed bladderwrack. Both are much more effective in combination than standalone and can be used for gastrointestinal conditions like constipation and low iodine issues.

Here are some ways how.

It contains the compound citrulline–arginine, which is known to improve cell growth. This compound is also rich in amino acids that are necessary to synthesize the protein collagen which is vital for healthy hair and skin.

Besides, Irish moss contains sulfur which manages the levels of microorganisms and also soothes inflammation on the skin. Plus it keeps the skin healthy and hydrated due to the presence of minerals and vitamins like magnesium, fatty acids and vitamins A and K.

Or, if you feel like taking a luxurious bath, you can do a lot worse than incorporating Irish moss in your bath water.

For this, you need to soak Irish moss in water for about a day. Add it to your bath and allow it to release its magic into the water. Get in and enjoy. (It’s up to you to keep the moss in the water or take it out before getting in.)

The collagen in the water may help to firm the skin and will definitely relax you.

All in all, this species of red algae is a natural and eco-friendly way to maintain skin health and perfect in combination with some DIY homemade skin care recipes.

You might also want to check out ways on how to create an eco-friendly beauty routine.

Irish moss is rich in vitamin C, amino acids and a range of antioxidants and antimicrobial agents. All these are necessary to fight infections.

The seaweed is also the perfect to combat cold because of the presence of potassium iodide which can get rid of the phlegm lodged in the airways.

But that’s not all.

Irish moss contains sulfated polysaccharides (SP) which has tremendous antimicrobial properties. This and a host of other compounds increase the blood count of all cell types in the body.

The seaweed also promotes proteins and enzymes such as defensins and lysozymes, which help to fight infections.

Don’t we all have times when we feel a little more off than usual and we don’t know why?

It might just be because of the lack of magnesium and potassium in our body, and also our lifestyle.

Can adding this seaweed to our diet help us to become less cranky?

You bet it can.

It is rich in those minerals. Plus, it does more than just trigger our happy hormones. Irish moss may also help to alleviate and treat brain-related conditions such as Parkinson’s, depression and anxiety. The potassium content is also proven to be helpful for children suffering from attention deficit hyperactivity disorder (ADHD).

As for lifestyle, embrace slow living.

Some of the most effective metabolic regulators in the human body are thyroid hormones.

Irish moss, due to its high iodine content, boosts these hormones and thereby metabolism as well. Moreover, the iron in the seaweed helps in the quick delivery of oxygen to tissues to meet the demands of the body.

Irish moss also happens to contain a good amount of Vitamin B2 (riboflavin) and Vitamin B9 (folate), which helps to keep up our energy levels.

While riboflavin is essential to break down carbs, fats and proteins, folate in conjunction with B12 helps generate red blood cells.

Provides support to the cardiovascular system

The seaweed improves the delivery of oxygen to the tissues thereby reducing the chances of heart conditions.

For those with unnatural hunger cravings and propensity to consume more than what’s healthy, Irish moss can be a solution.

There are a few reasons for this.

One is that the seaweed is a low-calorie food. Another is that it tends to clean out the colon which helps to suppress appetite. Thus, it may not be a bad idea for those who are not happy with what the weighing machine tells them, to try our Irish moss.

It contains over 90 percent of essential nutrients required by the human body, and this includes the acid taurine.

So, what is this taurine?

This sulfur-containing amino acid can be found in fish, meat and dairy products. For vegans and vegetarians, Irish moss can be an invaluable addition to their diet.

Besides taurine, the seaweed is also rich in beta carotene, fiber, pectin, vitamin C and B and a range of other essential minerals.

The sea moss is rich in potassium chloride which helps to break down the stubborn mucus caused by respiratory conditions.

This makes it a good treatment for bronchitis, flu, pneumonia and sinuses.

Now for some side-effects (yes, even “super foods” are not perfect)…

Despite its many benefits, there are some cons to this seaweed if not used with discretion.

Is there any thing as too much iodine for the body?

Excess iodine is particularly dangerous for those suffering from autoimmune thyroid conditions in which the immune system attacks the thyroid gland. In such cases, it can lead to hypothyroidism.

Too much iodine may also cause other conditions such as goiter and even cancer.

The key, as with everything, is moderation.

As per the FDA, the daily recommended iodine limit is 150 mcg (that’s less than one-sixth of a milligram). So, the next time you open up your packet of Irish moss, take some time out to read the label.

Irish moss is not ideal for certain health conditions

As is common with many species of seaweed, it has anticoagulant properties. So, if you are on blood-thinning medication, it’s better to consult a doctor before trying it.

The seaweed is also best avoided by people who are on medication for high blood pressure.

Same goes for individuals with ulcers or other similar conditions of the stomach.

Lastly, if you are suffering from diarrhea, stay off the seaweed; it has laxative properties.

Carrageenan and Irish moss are not one and the same even if some will want you to believe otherwise.

Carrageenan is, in the processed form, used as a thickener or stabilizer in foods such as ice creams, chocolate milk, and frozen food. It is also found in toothpastes and beauty products.

This additive gets a bad rap as a cause of digestive and inflammatory conditions with some studies hinting that it could even cause cancer.

More unfortunately, Irish moss as a whole gets pulled into the debate.

But there should be no debate in the first place.

Carrageenan is just one of the several ingredients that make up Irish moss and it has no nutritional value whatsoever. And they’re talking about processed carrageenan, not the wholesome seaweed in its most natural form that loses all its many benefits when processed.

How to use Irish moss

Irish moss can be added as a supplement to smoothies, juices, breads, cakes and pancakes.

Just remember to use as authentic a version as possible. Yes, you get some in the market that does not exactly come from the sea. A man-made version created in brine water lacks the nutrients and is not very appetizing.

There is after all bound to be a difference between seaweed and “pool-side” weed.

Once you have bought your Irish moss, try this simple gel recipe:

You can use it in soups, smoothies and juices.

Have you tried Irish moss yet? If you have, what is your opinion on it? Let us know in the comments.

I have heard of Irish moss, but I didn’t realize that it had so many benefits! I haven’t tried it before, but I think I will have to now, thanks for sharing a very informative post!

Thanks. It can be incorporated in so many dishes – soups, stews, cakes etc. I hope you like it. 🙂

Very interesting read. I’ve never heard of irish moss before. Thanks for sharing.

Thanks! Glad you liked it.

I can’t be the only one who didn’t think you could eat a type of moss?! I didn’t realise it had such nutritional value. Great post! 🙂

Thanks :). It’s more seaweed than moss, but yeah it has loads of amazing health benefits. Very versatile too.

Very interesting post. I just learned something new and different. Never heard of Irish Moss before. Thank you for this

Thanks Rayo 🙂 I’m glad you found it useful.

Had absolutely no idea that Irish moss was so effective! Great one!

Thanks Pragati. It has tons of benefits and I expect more to be discovered in time.

Wow – had never heard of this before! Thanks for sharing about it – I can’t wait to dig up more on it!

Absolutely! It goes in many recipes and there are health benefits with it. Thanks for reading. 🙂

I like natural stuff, and something you can add into food rather than tablets. To be honest, I just forget to take tablets, so the idea of something that can go into a soup is great.

So true! Natural stuff for me any time over processed products if I can help it.

I think this moss is a must try .Is it available in India ?If so where ?

You can find Irish moss in Ayurvedic herbal shops in India, but I’m not sure if they will be fresh. They are known to grow along the Atlantic coast of the western hemisphere. If you do find Irish moss in a shop, you might also want to buy some Bladderwrack. These two in combination have lots of health benefits.
Thanks for commenting. 🙂